Library of Historical Instytut of University of Warsaw 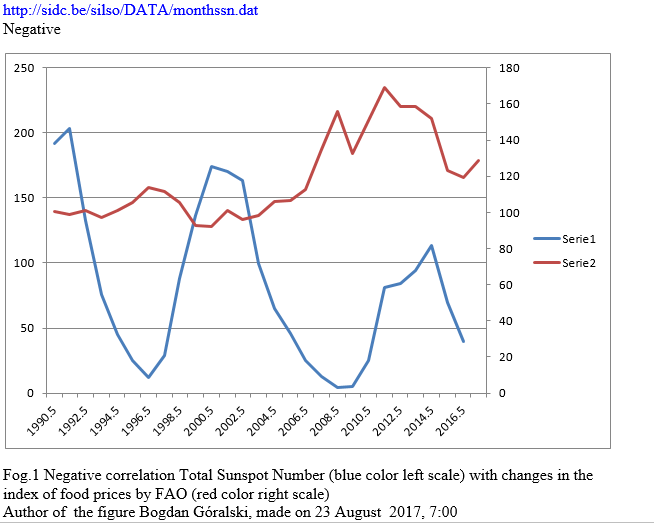 The chart above shows the change in magnetic activity Sun – Total sunspot number (blue color), a negative correlation with changes in the index of food prices by FAO. Since 1999, the index of food prices rising, especially in periods of declining activity magnetic of the Sun – decreasing values of Total Sunspot Number. In the period 2019-2040 will age decrease in the magnetic activity of the Sun and with it will increase global food prices. Increase the level of oil and gas prices, and inflation will rise which will lead to a global and very rapid economic and political crisis. I warn against this crisis for many years, but somehow not visible.

En Excerpt from this work:

At the point in the solar cycle when sunspots were least likely, wheat prices tended to be high, report Lev Pustilnik of Tel Aviv University and Gregory Yom Din of the Golan Research Institute in Kazrin1.

2. The area of cultivated land changes

What we can see on above picture is higher temperature in Northern Hemisphere NH versus Southern Hemisphere SH in period around 1914-1956 and 1997-2017. It can be explained by shift of Earth’s coating over liquid Earth’s core. Meteorological stations located all around the globe have moved to the ecliptic that way, so on the northern hemisphere is more of solar irradiance versus southern hemisphere, and higher temperatures in NH are being noted, and SH is cooling.

When the earth’s coating again moves back, there is a global improvement in the weather conditions in countries of western civilization, an increase in output per hectare, and an excess of food causing a decline in its price. And so in the circle. Food prices are affected by transport prices. In periods of decline in production in countries with no surplus food, there is an increase in the transport of food from countries with surpluses of food. This results in a significant increase in freight rates, which increases the price of food shipped. So, the drop in food production among the major food consumers in Asia is likely to increase freight rates, ie the BDI Baltic Dry Index?

Since about 1997 the northern hemisphere has begun to warm up, with respect to the southern hemisphere (see Fig. 3), and at the same time, the world food prices have risen sharply (Figure 1). Also during this period the total amount of precipitation in the USA and India decreased and the speed of rotation of the Earth increased (see link https://www.researchgate.net/publication/318838360_How_to_predict_the_rainfall_in_India_and_USA) and decreased magnetic activity of the Sun (Fig.1). The gravitational forces around the Earth have increased and the earth’s coating has shifted (see “Why Earth’s Coatings Rotate Around the Liquid Core of the Earth?” Link – https://www.researchgate.net/publication/319179377_Why_Earth%27s_coating_rotates_around_the_liquid_core_of_the_Earth) that on the northern hemisphere is more the sunny and US and India shifted up to the zone smaller rainfall.

There is likely to have been a decrease in the volume of food production in the US and India and other countries on the same latitude and rise in world food prices. The upcoming decrease in magnetic activity of the sun will likely again result in similar physical effects around the Earth, and on the Earth, and food prices will again begin to rise sharply. I ask the question: What is more effective? Do you transport food endlessly to countries that need it? Would not to be better to carry a surplus of population from overpopulated countries to countries with surplus agricultural land? In my opinion, this will safeguard us from the adverse effects of climate change. Further research is needed!!!